I used to be skeptical of companies like Hush. I mean, weighted blankets? Are they really all they’re cracked up to be? My wife always wanted one, but I put it off for the longest time. It sounded hot, and heavy, and they’re pretty expensive right?

Last December (2019) I finally broke down and bought her a Hush Blanket for Christmas. Let me just say, I don’t know what I was waiting for. It is so much better than I could have imagined, and now we both love it. It totally changes the way you feel in bed. Having that weight on you gives you such a feeling of security and serenity. I actually sleep better because of it.

We got the classic so it is warm, but I’m thinking of getting Hush Iced for summer. They just came out with a weighted throw as well, which is tempting.

Here at Product Review Hero, we love to write about products that we actually use and love in our everyday lives, so I’m glad I have the opportunity to put this review together for you. I’ve become a big fan of Hush, and if you decide to try one of their products, I am confident that you will too. As always, if you have any questions about Hush or about this review, please don’t hesitate to contact us.

Product Review Hero is reader-supported. When you buy through links on our site, we may earn an affiliate commission at no extra cost to you. That being said, we don’t recommend products or companies that we don’t like and believe in!

Hush was founded by Lior Ohayon. He came up with the idea after volunteering at a summer camp for special needs children. The camp had a sensory room with weighted blankets and Lior observed that these blankets helped to calm and soothe the campers.

After his time at camp was over, Lior started to wonder if blankets like this might be something that would be useful to the general public. He began to research the idea and discovered that there were weighted blankets on the market, but that most of them were lacking in quality, safety, or functionality. Some of them had poor quality stitching, others were made with toxic chemicals…needless to say, Lior thought that he could do better. Hence, Hush was born.

Hush is based in Canada, but as they have grown they are becoming more and more popular in the United States as well.

If you are from the US, you are probable familiar with the show, Shark Tank. On this show, young innovative companies come to pitch their businesses to seasoned investors. In return for a percentage of the company, the investors will provide funds and experience to help the company grow.

Canada has their own version of this show called Dragon’s Den. Lior and his business partner Aaron appeared on Dragon’s Den, pitched Hush, and were offered multiple different deals.

First of all, everything about these blankets speaks of quality. From the moment you take it out of the box you can just tell that it is a well made product. The inside of the blanket is made up of these pockets of non-toxic glass sand. This is what gives it its weight, but also allows it to remain completely flexible. It feels pretty cool, I hadn’t ever really experienced anything like that before.

So, these pockets are contained inside the blanket which is made of this nice microfibre material. The microfibre is great, but every blanket also comes with a duvet cover. I got the “Hush Classic”, so my duvet cover is a super soft mink type material. The “Hush Iced” comes with a different cover which is cool to the touch, for the summer months. It’s nice because you can use the same blanket in the winter and summer and just change the covers. Anyway, the duvet covers are great and I’m about to tell you why.

It just so happens that the same Christmas I got my wife our Hush Blanket, we also go two Frenchton puppies. They are cute as can be, but I have a really hard time keeping them off of my bed. Well, as puppies will sometimes do, one of them peed on my bed…ON my Hush Blanket.

As you can imagine, I was less than thrilled about this. I took the duvet cover off right away, and it’s so thick and nice that nothing had soaked through to the actual blanket. I threw it in my washing machine, let it hang dry and, boom…good as new. I’ve actually had to do that twice now.

Here’s a little tip: When you take your cover off for the first time, just make sure you pay attention to how it goes together. I did not, and it took me a couple of trie to figure it out. It’s a great system, it’s just a bit confusing until you get the hang of it. The second time I did it was no sweat.

The duvet cover zip to the actual blanket, but it also has several little ties, which fasten to loops on the blanket. It’s just another feature that speaks to the quality of these blanket. It provides the extra security needed for a blanket of that weight and prevents it from clumping or balling up inside the duvet cover. Mine spreads out perfectly every time.

You could just take my word for it that these thing actually work. I mean, I love mine and that it helps me sleep better. But you don’t have to. There actually is a science to this.

Weighted blankets were originally created to help patients suffering from sleep anxiety. The secret is DTPS, or Deep Touch Pressure Stimulation. DPTS reduces the stress hormone (cortisol) and increases your body’s production of the happy hormone (serotonin) and the sleep hormone (melatonin). This allows you to sleep deeper, longer, and wake up more refreshed.

Here are a few of the conditions that weighted blanket have been shown to be helpful in providing relief for, according to Healthline.

What Weight Should You Choose?

This is an important question. You want to make sure you have the correct weight blanket in order to reap the maximum benefit from it.

A good rule of thumb is to choose a blanket that is about 10% of your body weight, or of the combined body weights of you and your sleep partner.

I got the the 30 lb blanket for me wife and myself (our combined weight is about 330lbs) and it is perfect.

Since Dragon’s Den helped to push Hush into the spotlight, their sales have soared. In the meantime, they have been hard at work expanding their product line.

In addition to the Classic, they now have “Hush Iced” which is a cooler version of the Classic meant for use in the summer months. They also just released a weighted throw which is available for pre-order and will begin delivery in June of this year (2020). From what I’ve seen it looks great, and i’m tempted to get one for myself.

Next, we’ll take a look at each of the Hush products individually and then I’ll tell you about their 100 Night guarantee and their blanket donation program. 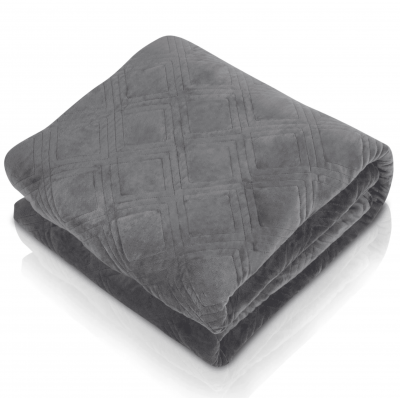 I’m not sure what else I can say about this blanket that I haven’t already said. This is the one I own, and it really is like sleeping in a hug. I haven’t sleep the same since I got it and I would never go back. I’m a weighted blanket sleeper for life!

As far as sizing goes. If you sleep with someone else you can either get one blanket that is roughly 10% of your combined weight, or you can buy two twins so that you each have your own. It really just depends on your sleeping preferences. My wife and I share the 30lb King and it works out great. 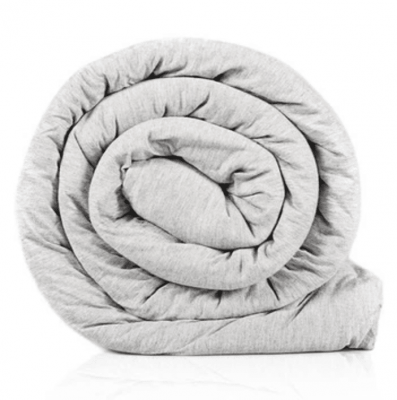 This is the summer version of the Classic Blanket. The guys at Hush realized that their blankets could get a bit warm in the summer so they developed this cool-to-the-touch cover that is engineered to wick away sweet and keep you cool. Kind of like performance athletic clothes do.

The inside of the blanket is the same high-quality microfibre blanket filled with glass sand, just the duvet cover is different.

The Iced duvet is made from a super-soft and stretchy blend of bamboo and cotton and is completely anti-microbial. You can buy Iced as a separate blanket or you can get the 2-in-1 Hush Blanket Bundle which comes with both the iced and the classic covers. 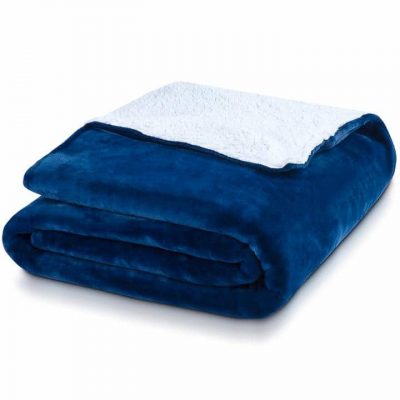 The newest addition to the Hush product line is the Hush Throw. As of this writing ( April 2020 ) they are accepting pre-orders for June delivery. I haven’t had the pleasure of trying the throw personally yet, but it looks like it is made with the same care and quality as the blankets.

The idea is to take the comfort of their weighted blankets and make it portable. The throw is 42 x 72 inches and weighs 8 pounds. Inside, you will find the same non-toxic glass sand enclosed in ultra-soft polyester, that the blankets are made from.

The outer cover is two sided. The blue side is made from a high quality satin microfibre and the white side is a super soft fleece. The whole cover unzips and can be thrown in the washing machine for easy cleaning. 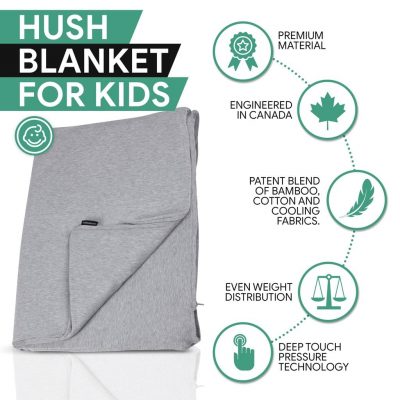 Hush Kids is perfect if you have a child that has a hard time falling or staying asleep. This blanket is designed for children between 40 – 70 pound. The blanket itself weighs 5 punds and is 38×54 inches.

Hush kids comes with either a Classic or Iced cover. The Classic has kid friendly designs on both sides and is made from soft, breathable cotton. The Iced (pictured above) is gray and is made from a cooling bamboo/cotton mix. Both covers zip off for easy washing. 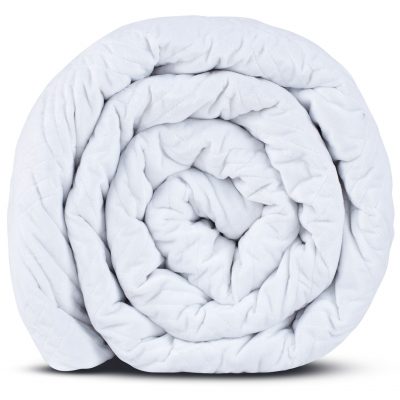 This is the same great Hush Classic Blanket with a brand new look. Now instead of just the gray duvet you can order your classic with this super soft cloud white cover.

The Hush Commitment To Quality

I’ve already told you about the features that I believe make these the best quality weighted blankets out there. The guys at Hush believe that too and they are willing to back it up.

Hush Offers a 100 Night Guarantee on all of their blankets. This means that you can try the blanket for up to 100 nights, and if for any reason you decide you don’t like it, you can return it for a full refund.

Another cool thing that Hush does is their blanket donation program. It’s called Hush GiveBack.

For every 5 Kids’ blankets that are sold, Hush will donate one to an organization that helps children with special needs, terminal illness, or poverty.

For every 10 adult blankets that are sold, Hush donates one to organizations such as homeless shelters, or places that help adults with disabilities.

Hopefully I’ve been able to answer all of your questions concerning weighted blankets. If not, you can feel free to Message Us at any time. Like I said, I was apprehensive about purchasing one at first, but it turned out to be a great decision.

The bottom line is, if you’ve been considering getting a weighted blanket, you can’t go wrong with Hush. The quality of the blankets is unbeatable, the prices are reasonable, and the company is run by good people who believe in giving back. I put off getting one for far too long.