If you are into cosmetics at all, I’m sure you have seen, or at least heard of the new magnetic eyeliner and lash kits. And if you are familiar with these, then you have probably heard the name LashLiner.

In 2018 LashLiner became the first company to invent magnetic eyeliner and bring it to market where it became an instant hit. Before they knew it, they were being featured in places like Good Morning America, ABC News, Buzzfeed, and Elle.

Since then, there have been numerous copycats as other companies have scrambled to grab part of the market share. We’ve been keeping on eye on this here at Product Review Hero, and there are a few reasons why we think LashLiner is at the top of the game when it comes to magnetic lashes.

In the following paragraphs we will talk about LashLiner’s background and what makes them special, as well as take an in-depth look at each of their products.

LashLiner was founded by photographer, beauty queen, business owner, and inventor, Laura Hunter. Laura hails from Seattle, Washington and has long had a heart for the beauty industry and for empowering women. She competed in beauty pageants for many years and is the current owner of the Ms. World Pageant.

Laura is also something of an inventor and loves coming up with brand new, never-before-seen beauty products. In early 2018, after much trial and error, she was able to take her idea which she named, The LashLiner System, and turn it into a world wide phenomenon.

Since founding LashLiner, Laura has gone on to launch sister-company, Tori Belle Cosmetics, and has continued to bring ground breaking new cosmetic products to market.

LashLiner In The Media

When LashLiner launched, nothing like this had ever been seen before. As word began to spread, they were inundated with interview requests. They have since been featured by Tati Westbrook, Good Morning America, Elle Magazine, abc News, The List, Martin Catalogne, The Marilyn Dennis Show, BuzzFeed, and Engadget, to name a few.

We have included a couple of our favorite video reviews for you below.

Where Is LashLiner Located?

LashLiner started small…in Laura Hunter’s living room to be exact. They quickly outgrew that and moved into an office in Everett, about 30 miles north of Seattle, and this year (2020) they moved again into a much larger office/warehouse in Bothell, Wa.

What Makes LashLiner The Best?

There are a few reason why we think LashLiner is the number one choice out of all the magnetic lash options on the market today.

We don’t claim to have seen all the lashes out there, but we have seen quite a few, and none of them compare to LashLiner when it comes to product quality. All you have to do is hold them in your hands to feel the difference. Lashliner is heavier and better made, which equals more durability and more uses than the competitors.

Made In The USA

We all know the quality of a lot of the stuff that comes from China these days. LashLiner Lashes are made in the USA which is a huge plus for us.

LashLiner stands behind their products and they are all about serving their customers well. When you contact their customer support, you aren’t communicating with someone half a world away. They have a fully staffed support team that operates out of their office in Washington. If you need help with something simply message them on FB or contact them via their website.

Where Can I Buy LashLiner?

Hey, great question! LashLiner is a completely e-commerce company. They don’t sell to chains, they don’t do direct sales, and they don’t operate brick and mortar stores. This allows them to keep their overhead low and their prices affordable. It also enables them to keep a constant eye on their product quality and make sure that they are providing their customers with the best lashes out there.

You can shop for lashes 24/7 with free U.S. shipping on LashLiner’s website.

These guys focus on eyeliner and lashes. That’s what they’re good at and that’s what they stick to. We are going to take a look at the styles they offer and give you all the important details.

All LashLiner Products are Cruelty Free, Vegan, and Gluten Free 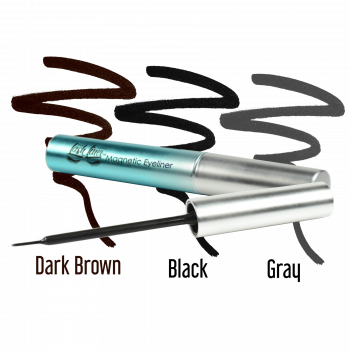 LashLiner invented magnetic eyeliner and they spent a lot of time perfecting it. This liner is waterproof, smudge proof, and latex free. It’s easy to apply, looks great, and it doesn’t run, fade, or flake.

It originally came only in black but they have since expanded to include dark brown and gray.

The lash bundles are a great deal, and come with lashes, magnetic liner, and 8 bonus anchors. Anchors provide extra hold in case you are going to be out on a windy day, going for a motorcycle ride, or something like that. However, we found in our testing that we didn’t need them, even when we wore our lashes while out boating!

The lashes themselves have six magnets on the back which simply “click” into place on the magnetic eyeliner. If you notice after a few wears that your lashes aren’t sticking as well as they used to, or if you see buildup on the magnets, grab a q-tip and some rubbing alcohol, and clean the magnets. That should fix the problem and get your lashes sticking again.

All LashLiner Lashes are trim-able from both ends, so if they seem too wide for your eyes, you can cut them down to fit better. We have found that it looks best when you cut the end that is going to be at the inside of your eye (closest to the nose).

We made sure to take good care of our lashes and found that we were able to wear them between 20 and 30 times before we had to replace them. Oh, and another pro tip!…make sure you don’t wipe excess liner on the edge of the bottle. If you do it dries up and falls inside, ruining the rest of the Liner. Always wipe excess on a paper towel or your hand instead. 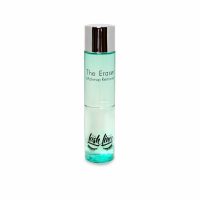 LashLiner’s Makeup Remover is specially formulated to remove their waterproof and smudge proof magnetic liner. It works great and the liner comes right off without scrubbing.

LashLiner takes the cake when it comes to magnetic lashes. Save yourself the headache, and get the lashes that work!